The Autumn season brings back fond memories of Friday night football games.  During the Fall of 2013, we took Caiden to as many high school football games as we could.  He had such a blast at these games!  He was a big fan….waving pom-pons and clapping for his team.

Caiden’s favorite part of the games was watching the band, watching the team run out on the field, and keeping his eye on the mascot during the game.  He was a faithful fan of his team, and would cheer as much as the parents in the stands.  It was one of our greatest joys to take him to the games, and see the sparkle in Caiden’s eyes as he would watch the game.  And when the band performed, Caiden was just enamored with the music and the instruments.

The only problem with this ritual of attending Friday night football games, was that Caiden could not understand that he was watching a “football” game.  He always called it a “baseball” game.  As much as we would correct him, we just couldn’t change his mind.  It became a family joke….

We were anticipating the Spring season, when we could take Caiden to a real “baseball” game, just to show him the difference between the two games.  But, as we now know, we never got that opportunity.  Caiden passed away before we could take him to a baseball game.

Here’s a picture of Caiden and his Papa at one of the football games.  The Wildcat mascot was Caiden’s favorite….Caiden would follow the mascot during the entire game. 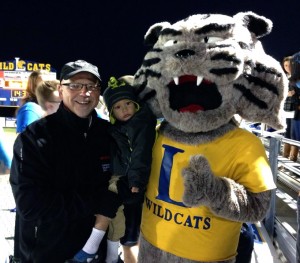